skip to main | skip to sidebar

This was to be our 3rd spring trapping these wonderful little Buteos which migrate north to breed all the way from South America. Last year was our best with 94 birds banded bringing the total to 137 caught since 2018.
This year we were hopeful for another good season and started a bit earlier on 17th April with a bird seen in the morning and one caught in the afternoon.
We had fitted alpha-numeric colour bands to birds starting in 2018 so we were hopeful to ring read some individuals in the field with a telescope and camera.

We were hampered by weather with snow flurries and rain with winds, but over the next week managed to catch a few birds and by the 27th had had an 8 bird day.

One of the highlights of the month was catching 8 adult Barred Owls! This was an unprecedented number of birds considering we only ever used to see one a year if we were lucky! A Red-shouldered Hawk was a wonderful Bonus too. It flew the first time we tried to catch it, so we went back the next day and on the 2nd pass back through the site, Charlotte spotted it deep in a woodlot. We set the trap and the bird came in and we caught it. The first adult male we have both seen in the hand and what a bird!
We also found a nesting pair of Red-shouldered Hawks too, this was a great find for this species which are not common and move up to this region to breed from further south.
As the weather improved, we started to see turtles on the road and so we rescued a few giant Snapping Turtle and some large Blanding's Turtles, the latter a threatened species in Ontario.
We also were extremely lucky to have seen two Fisher Cats by the side of the road with great views of this very seldom seen mustelid.
Probably the best bird encountered was not a captured one, but a resighting of an individual whom we had originally caught and metal banded only in 2018, then captured in 2019 and fitted with an additional colour band (X05) and now seen again at the exact same spot 2 years and 3 springs later!! We managed to spot 6 individual birds with alpha numeric numbered rings on

We were lucky to have been able to stay in a cottage on 2 occasions where we set mist nets and managed to catch a nice mix of species:


During the Month of May, we managed to catch and band 66 Broadwings 8 Barred Owls, a Red-shouldered Hawk, 5 American Kestrels and a Sharp-shinned Hawk.

We had come to realise that catching this many Broadwings, (current total at 204 birds), was something special, as no big numbers are caught other than at raptor blinds of birds on passage. In the history of N American banding, we seemed to have caught and banded some 20% of the all time total!
Therefore it wasn't long before we attracted the attention of Becca Mcabe who was researching Broadwings with Hawk Mountain Sanctuary. She came across from Montreal with 3 transmitters to fit on birds as part of the Broadwinged Hawk Project. We re looking to catch the larger female birds of over 390 grams and we soon had them with birds of 508g 405g and 411g. One of the birds after release travelled 400 km east and has since remains in an area north of Kingston Ontario, while the other two look like they will remain in our study area to breed.

We had found several Broadwing nests and some of the larger females caught had well developed brood patches and had started primary moult.  So far all the birds we had caught were adults and we had only seen 4 juvenile (2nd year) birds though all of May, so it was really exciting one morning in early June to catch 2 individuals which were also at the same stage of primary moult as the adults. The juveniles will take a year to begin moulting into their adult plumage and mostly do so on their wintering grounds further south.

We are continuing to monitor the nesting pairs of Broadwings and will soon be looking to trap adults now with young to feed. We are also very keen to catch recently fledged juveniles when we will be able to pinpoint the natal areas from a banding perspective.
Further news on the satellite tracked birds will be available in the next blog.

With the Covid-19 Pandemic manifesting itself on the international travel scene in March, I was able to to escape from the looming winter in South Africa to Canada, just in time before borders started closing.
The winter raptor season for Simcoe Country Banding Group is from November 1st to April 1st and so this was the latest I had ever been out trapping in Canada.
Charlotte and I started out doing the western sites in March, where we saw hundreds of Tundra Swans on migration and resting in the fields. There were also many Pintail and Mallard. Spring was certainly in the air with American Woodcocks 'peenting' and we saw our first Sandhill Cranes on the 25th. It was mostly around +2 degrees with some mornings starting off at -6.
Over the next 2 weeks, we managed to catch Charlottes 30th Snowy Owl for the season and then 2 birds later the groups 50th for the season.
Rough-legged Hawks were plentiful during this time, all heading to the arctic to breed and we caught our first one on the 18th, a a beautiful blonde 3rd year female. We also caught our first dark morph, an adult male.
We continued to trap until the 6th of April, as we were still catching Snowy Owls, which are the priority as well as a couple of Rough-legged Hawks up to the 5th of April.
Red-tailed Hawks were generally plentiful and we continued catching into April with Charlottes 50th on the 24th and the 51st was a controlled bird that had been banded as a hatch year in 2010 at Holiday Beach on Lake Erie.  Most of the birds we were seeing and catching were migrants.
American Kestrels were abundant and we caught up to 4 on some days, also moving through and we got the groups 52nd bird of the season which was a new record.


Posted by African Affinity at 12:35 PM No comments:


The next trip was with Mark and Theresa Stanley.

We set off from Johannesburg on the 25th of February to the Northern sites. We were hampered by strong unseasonal winds, which scuppered most mist-netting activities. We only managed 109 birds of 62 species, including 46 raptors of 16 species.

Some of the highlights were finding a 3rd year Martial Eagle on a pole which we dropped for, but alas, no interest. They can be fairly straightforward to catch at times, but then again often un responsive to traps. Anyway, it raised the heart rate whilst we waited!
At our site in Mapungubwe NP, we had dropped a trap for a Wahlberg's Eagle and whilst waiting, watched a mixed flock of Meve's and Greater Blue-eared Starlings along with Grey Go-away birds, making a huge cacophony near the trap. Thinking it was a snake, I decided to go pick the trap up, just as a Leopard ran across the track next to it! The big cat had been watching us all along!
We also had great views of a pair of Bat-eared Foxes during the day.
We witnessed a kettle of some 70 Steppe Buzzards overhead at the highland forest site, this is not the first time Ive seen this hear, but interesting to see such migrating concentrations on the wintering grounds. Seeing a Sooty Falcon flying over the lowveld site was a treat, quite a rarity for South Africa, and the 2nd one Ive seen at this site! 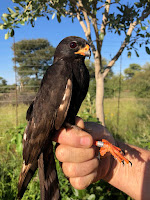 This was to be my 4th winter visit to catch and band the great White Owls of the North!

This time we had 2 friends come visit us, Steppe Wilson from California's Golden Gate Raptor Observatory and bander Debby Wheeler from Vancouver, who last came to the Kalahari with me in 2018.
Steppe arrived first and we set off to our regular sites. Steppe has banded raptors all over the states and has been active at a site in Montana catching Golden Eagles, of which he told us recently they got 14 in one day!!! After seeing a few owls we finally got 2 adult male Snowy Owls last thing in -16 as well as a grumpy Northern Shrike (they are always grumpy)!
It was still early and not cold enough to get the numbers of Red-tail Hawks we had last year, but we got 4 one day at the southern site on Lake Erie including 2 American Kestrels.
Christmas Day we went to Charlotte's sisters and got a festive American Kestrel on the way!
Just Charlotte and I one day at a site just north of Toronto, caught a big female Snowy and taking it off the trap, I noticed it had a rivet band on, a text to Nigel Shaw soon revealed that it had been banded in Montreal 6 years previously as a 2nd year!
With Debby, we had a good first day with 7 Snowy's seen and 2 caught, including 3 Red-tails and a Rough-legged Hawk. The next day we saw 10 Snowy's and caught 3 plus a Red-tail.
At one site we stayed late to try mist net several Short-eared Owls, we around 10 bird hunting, one even landed on a net pole! But no luck.
Charlotte and I went to Meaford, a lovely little town on Lake Huron where our friend Jim and Catherine let us stay in their house whilst they were overwintering in Mexico. Our aim was to explore a new area to the west and we found lots of Owls! The weather was shocking, horizontal gale force winds and driving snow, BUT, we managed to get 6 Snowy Owls and dropped for 12! We also got a Red-tail, that came in from 300m, sideways! And an adult female Rough-legged Hawk at 1.6kg!
Our last session was one of the best. Back to a regular site, new birds had come in and we got 6 Snowy Owls, including a control! a bird that had been banded in New York state as a hatch year in 2013!!
Totals were:
Snowy Owl 23 (2)
Red-tailed hawk 29
Rough-legged Hawk 3
American Kestrel 12
Northern Shrike 7

Posted by African Affinity at 1:43 AM No comments: